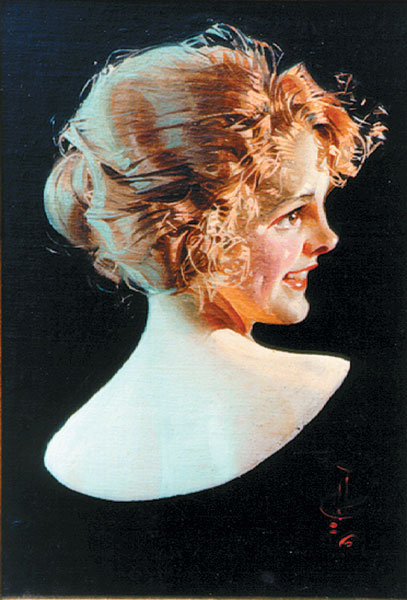 Tracing the path that Tony D’Amico has taken thus far in his painting career is easier when you consider three choice pieces from his personal collection of art.

The first piece D’Amico discussed was an oil painting by the famed illustrator J.C. Leyendecker. Before D’Amico went full-time as a painter, he worked in advertising and marketing. In that role, he met with many illustrators, buying illustrations and studying what is good in that realm. He naturally was aware of the so-called Golden Age of illustration, and he naturally loved the work of the giants of that era — including that of Leyendecker. “I admired those guys — Flagg, Loomis, Cornwell, and, of course, Leyendecker,” D’Amico relates. “Leyendecker was Norman Rockwell’s idol. I started collecting pieces from the ‘20s and ‘30s and came across this guy in Florida — a very eccentric individual who started collecting illustrations before it was fashionable. I went down to Florida to meet with him, and he took me to a warehouse in a not-so-good part of Orlando. It was like the Home Depot of illustrations! He had racks up to the ceiling of illustrations he had collected over the years — including the biggest names. This piece was one of them, and I bought it on the spot. He passed away and didn’t leave any relatives, so his estate was auctioned off. It amounted to well over $20 million, and there have been subsequent auctions from this collection. And he lived like a pauper.

“Anyway, Leyendecker had it all — great design and technique, the brushwork, the color, how he makes the figure appear out of the darkness. This is a study for part of a Chesterfield cigarette billboard. It is so stylized, but the woman’s skin has such a luminous glow to it.” Next is a piece by Don Demers. “I met Don in a workshop back in 2008, and he became my mentor and my friend,” says D’Amico. “He changed the course of my career. After meeting him I decided to paint full-time, and I’m very, very grateful for his friendship. He has an incomparable knowledge of his subject matter, and his technique is off the charts. He’s very dedicated to his craft and he’s fun to paint with.

“This particular piece is a commission. I wanted something similar to what he had previously done — a ship in the background, with the forward one a pilot ship that guided big ships into the harbor. The ship in the background is from a photo of the ship that brought my grandfather to the U.S. from Italy in 1910. So this piece has personal meaning in that way, too. This is probably the premier piece of my collection. It captures all of what I said above. Notice how Don painted the sea, how he showed how a wave turns, and the design of the piece. He has such knowledge of the sea.” Last is a painting by Matt Smith. “I only met him in 2014 in a workshop, but I had always admired his work,” says D’Amico. “His design skills are just excellent. It’s spot-on in terms of color temperature. And whether it’s plein air or not, it looks like it was done on location. This one was plein air. He’s so confident in his brushwork. Matt is one of the most admired artists out there today, and I feel very fortunate to own a piece of his and to have taken one of his workshops.

“This painting brings me there. I am immediately transported there; I feel like I am standing in the middle of that stream. I look at this painting every day. I see it as a reference for my painting process and also as a beautiful respite from my day.”