Home Tips for Artists How to Paint Misty Rays of Sunlight 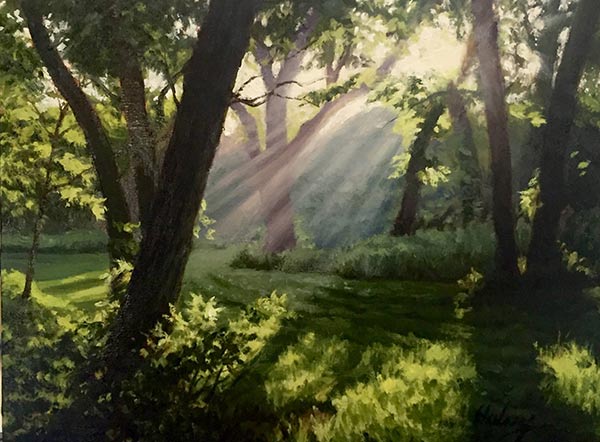 Kansas painter John Hulsey decided to tackle one of the hardest light conditions an artist can face: uneven mist illuminated by rays of sunlight in a clearing of the woods. Here’s what he learned.

Hulsey says one of his first inclinations — to simply glaze white paint over the scene where the rays are falling — simply doesn’t work. “It looks pasted on,” he says. “Instead, you have to paint the background shapes lighter wherever the ray passes in front of each object. It’s an enormous amount of work.”

The challenge is to paint those areas lighter, but have it seem like the rays of light are passing in front of those background shapes. The rays of sun, meanwhile, must look ethereal. “It can’t look solid; it is light, not hard objects,” says Hulsey. “And additionally, the mist doesn’t obscure the objects evenly. The mist is thicker in places.”

There is another maddening factor a painter must include: The light is different in the tree canopy than it looks on the ground. This is because the light is diffusing, much like light acts as it comes through an aperture. In this case, the leaves of the trees are creating the aperture through which the rays are traveling. “In nature, if you really look at the edges of the rays, they are soft because the light starts to scatter immediately once it goes through the aperture,” says Hulsey. “If you paint that line between the ray and the background with a hard edge, it doesn’t look right. So you have to study the physics of it. As the light gets further from the aperture, it gets softer and paler, until the rays disappear. If you don’t paint this, it looks false. But when you get it right, it’s wonderful.”

The artist was only dealing with mist in the forest. He points out that fog near the ocean differs from this mist — in fact, fog on a mountain lake differs from both light conditions. “The mist we have in this little clearing you can see through, you can see colors through it. It doesn’t obscure like fog does.”

It all adds up to an incredibly complex scene to paint, and that suits Hulsey just fine.