Being able to paint faster in the field is a worthy goal, right? Kim Carlton set out on a “Year of Painting Fast” to gain this skill, but halfway through, she had second thoughts. When she wrote a blog post addressing this issue, the response was surprising.

“I was completely taken aback by the response to this article,” says Carlton. “I woke up on the morning of publication to a dozen e-mails from total strangers, and then the Facebook response knocked me out. There were private messages, dozens of ‘shares,’ and lively conversation threads springing forth. I’m thankful that people have forums like those to discuss things that affect all of us. I love the events that have grown up around plein air painting, and I hope they continue to grow and thrive. I do wish there were more events like the Plein Air Convention & Expo and Publisher’s Invitational paint-outs, where people come and just learn and share and paint together. I always wished I’d been in Paris in the 1890s, where painters and writers just lived and worked together all year long, making great leaps in thought because of the sharing. We’re in the middle of a similar thing, I think; the Internet and the jumbo jet help us have fellowship with each other. The trick will be to allow it to grow us together and not pit us against each other or cause us to feel inferior and give up. It’s art.”

Carlton signed up for two workshops this year with the express purpose of learning how to paint quicker en plein air — one with Jill Carver and another with Ray Roberts. In both cases, she heard something different from what she expected. “Here’s what we all did learn: Sometimes what you think you need to learn is different from what you actually need to learn,” she writes in a blog post on the Oil Painters of America website. Both instructors said, and showed, that speed is not the key. Roberts focused on deliberate color mixes and small studies that captured the essential elements of the scene, which he later combined in a studio piece. Carver focused on values, and on internalizing a scene to the extent that it could be by painted by her with her back turned to it. “I’ll tell you how this affected me: I felt liberated,” writes Carlton. “Liberated from my own expectations and free to be myself out there.”

The Texas artist says she decided that “the point is the product, not the pace.” Evidently, many other artists were traveling along the same path as Carlton. “Lo and behold, I found that almost every single person in both workshops had signed up for the same reason, showing me I was not alone. It occurred to me during Ray Roberts’ workshop that plein air painting might be like running: you’re either a sprinter or a marathoner, and training only strengthens your natural gifts. I felt even more sure about that during Jill Carver’s workshop. When I got home, I had a sort of epiphany. I realized that I had been down on myself for a long time because I couldn’t do what other people could do, and that negativity was hurting my experience as a painter. It was probably hurting my paintings, too. That’s when I started writing. I’m really happy that the article has hit home for so many people. I’ve been told that people were just about to give up being artists, but that now they feel like the pressure has been lifted. We are doing this to ourselves, and it’s pretty sad.” 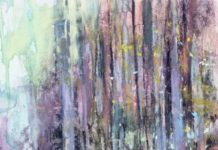